Poorly implemented translations ‘logic’ is something that really grinds my gear. Today I ran across the new Dyson 360 Eye and it is a case study in how to not do website translations.

Since I’m connected to a VPN in Switzerland, this is what I was presented with: 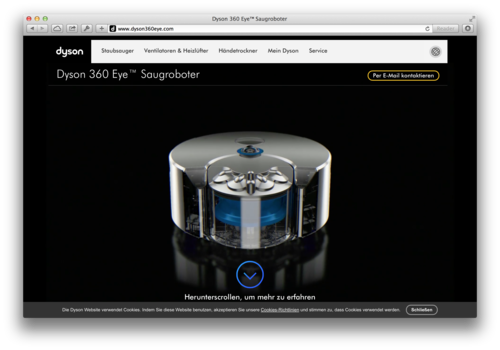 As you can see, the website is in German just because I connected through Switzerland. Now let’s analyze why this is bad.

Your location isn’t really a great way to determine the language for a user. For instance, there are plenty of companies that route all their internal traffic through a central end-point for all their remote offices. Using this approach, all them will see the language of the country the end-point is located.

There are of course a ton of other situations that would break this logic too, such as VPN users (like yours truly) and incorrect GeoIP lookups.

A far better approach is to look at the locale of the browser, and user that as the basis. That way, you can serve the user with the language s/he prefers (regardless of location).

Give the users a choice

Even if you have a good implementation for auto-probing for the users’ language (either using GeoIP or locale), you should still give the users a choice to override this.

In the case of Dyson, there is no way for me to change the language, nor override it manually by altering the URL.

What should I do?

It’s easy to criticize, so let’s give Dyson some constructive feedback instead: